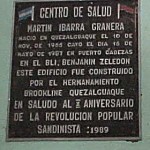 In June and July, 1989, after months of fundraising, a group of volunteers from Brookline and neighboring towns, including two building contractors, an electrician and a hydraulic engineer, went to Quezalguaque to build the town’s health clinic alongside volunteers from Quezalguaque. Much of the building material was purchased in Nicaragua, but other donated and purchased material was shipped to Quezalguaque from Brookline. Most of the original furniture was provided by us as well. An organization called Vecino, which had experience building in Nicaragua, worked with us on this project. A plaque in the Centro de Salud/Health Center honors Elizabeth Wyon, an early Sister City activist who passed away shortly after the building was completed.

In 2003, we funded the construction of an additional room at the health center to be used as the nurses’ office. In February, 2004, a group of volunteers from Brookline painted the health center and replaced the entire ceiling and some light fixtures. Between 2005 and 2008 various repair projects were supported for the satellite health station in Cristo Rey. 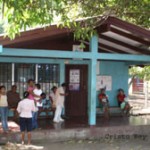 In late 2011 the Sister City Project committed to funding the renovation and expansion of the satellite health station in Las Mercedes.

The Brookline-Quezalguaque Sister City Project is a tax exempt 501(c)(3) organization.  Contributions are tax-deductible to the extent permissible by law.