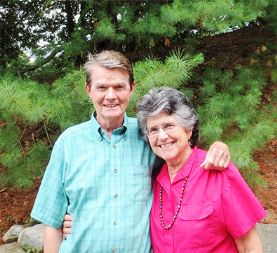 Jean Stringham was the Sister City Project’s first treasurer and served on the Board for 10 years. Later, Dr. Peter Stringham joined the Board and after more than 15 years of service continues to be very active having most recently served for 6 years as Chair of the Medical Committee dealing with issues such as the epidemic of chronic kidney disease and the Zika outbreak in the Central American community.

The Brookline Sister City relationship began over 30 years ago when Brookline teacher Maxine Shaw traveled to Quezalguaque to teach in a one-room school house. She wrote home to friends about the limited resources in the community. Because of a growing interest in supporting the needs of the Nicaraguan community, the Board of Selectmen and Town Meeting voted to establish the sister city relationship.

“The Sister City relationship is a partnership in which we learn from each other,” said Richard Segan, president of the Brookline Quezalguaque Sister City Project Board of Directors (BQSCP). “More than 250 people from our community have visited Quezalguaque over the years. It is a cultural and educational exchange. We’ve also partnered with the Quezalguaque community in a wide range of areas largely in response to their suggestions. We hope we’ve contributed in some small ways to address unmet needs. Our primary areas of partnership have been in education, health care, and housing.”

Many initiatives currently supported by the organization includes creating a mobile library, supporting special needs education, creating an arts program, providing better health care access, and building the first computer classroom in the region. Despite being created by a vote by the Board of Selectmen and Town Meeting, BQSCP receives no government funding. All of these initiatives are funded by Brookline residents and with contributions from many community groups like Brookline Rotary, All Saints Parish and the Friends of Brookline Libraries.

Recent discussions about immigration from Latin America has created division in many communities across America. However, Segan said BQSCP has actually done a good job of bringing together Americans and Nicaraguans.

“Those of us who have had the good fortune to be able to spend time in Quezalguaque quickly learn that the population aspires to many of the same things that people want in our community, e.g., quality education for their children, access to health care, safe drinking water, etc,” Segan said. “Perhaps if more people had opportunities like we have had to share people-to-people experiences, there would be less fear and more understanding of those fleeing from unstable societies.”

Dr. Milagro Baldelomar, director of health services in Quezalguaque, and four teachers from the Nicaraguan community have been invited to attend Brookline Sister City Week. Dr. Baldelomar will work with BQSCP on many initiatives to improve health care delivery, including care for chronic kidney disease (CKD), a leading cause of death in Quezalguaque.

Also part of Brookline Sister Cities Week, there will be a Science on Screen program at the Coolidge Corner Theatre on October 17 which will focus on water security issues worldwide and a program on Brookline and Latin American poetry on October 16 at Center Communities of Brookline.

The organization plans to continue building these people-to-people relationships in the near future with more focus on education, health care, student/teacher exchanges and other priorities between the two communities.

“Most importantly, we hope to continue to contribute in a small way to global understanding,” Segan said. “The direct face-to-face contact afforded via the Sister City Project is incredibly educational and also rewarding for the participants.”