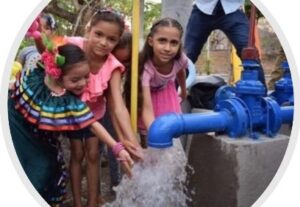 Fundación Ecología y Desarrollo (ECODES) of Zaragoza, Spain, is the lead partner on solar projects. Sister City has secured this outside funding for the past several years and also contributed to provide ongoing technical assistance (TA) and training of CAPS personnel and for assessing unmet needs. The Sister City board recently voted $4,000 to allow ECODES to continue providing this training for period over the next year.

2022   A second Rotary grant has been awarded for $33,000 and for installing solar power at the Cristo Rey MABE. Sister City is contributing an additional $7,000 for this project, and this will be the fourth MABE to have solar power. The Sister City Board has voted $3,825 for repairs to the Cristo Rey primary school facility in 2022.

2021    Thirteen schools were assessed under an ECODES grant with a Sister City contribution and improvements in water/bathroom facilities were made in six of them in time for the new school year.

2020    Solar power was installed at the Las Mercedes and Paso Benito MABEs, thanks to a grant secured by ECODES, which Sister City also contributed to. Electrical expenses have been reduced by approximately 60% since installation of solar.

2019   The work continued on the infrastructure of the water systems in 7 comarcas, and the personnel who inspected and maintained the systems were trained.

2018    The first Rotary grant in the amount of $35,000 was designated for infrastructure improvements at 7 MABES. It also involved training of CAPS personnel by ECODES staff. Sister City was a contributor to this project.

2017   The waters systems were inspected and areas for improvement were identified, which included the water tanks, the pipes, the pumps, and the filtration systems.